“Now I understand how hard you guys have to work just to make something look bad.”
--Glen Keane after his first foray into CG animation

As a greatly-skilled 2D animator, Glen Keane can draw each frame to feel exactly how he wants. But his experience during the production of Tangled showed him how difficult it can be to create “art” with the current CG tools available.

During his recent talk at AniMAtic Boston, Raf Anzovin, creative director of Anzovin Studio in Florence, MA, showed some studies based on famous Disney scenes, to demonstrate one example of where he hopes CG can make some strides.

If the question is “should I track my arcs,” then the answer is a resounding “YES!” But the question of how we have been forced to trace our arcs is a good question to ask, and it’s an example of how CG tools have forced many animators to feel less artistically free while they work. As Raf said during that same talk:
“CG hides all of the animation fundamentals.”

Perhaps this work flow sounds familiar to some of you: You start your polish pass by getting out your dry-erase markers, or whatever motion trails your package gives you, and start to track the motion of one joint, frame-by-frame, to check for hiccups. Then you go into your curve editor at the places you want smoothed and tweak things wherever you find issues. This is not necessarily a bad method, but this method comes from your computer program refusing to give you a more visually expressive way to animate what you want.

Let’s take a look at Raf’s example from Disney’s The Jungle Book. At first glance, it has some surprisingly bad smoothing on an arc.

It looks this way because we are following a single joint throughout the animation, like we would in CG software. Following the arc of the wrist we see the arcing motion, but it is very jagged.

Now let’s see how it looks if we track the overall curve of the arm:

This changes everything! Now the curve is very smooth. Also, the little loop at the end is completely different than what the wrist tracking alone gave us.

2D animators aren’t limited to tools that only show how a single point in spaced moves (though sometimes they employ that method). Instead, they tend to use flipping and onion-skinning (whether via light box or software) to see how each pose relates to the poses around it. A traditional 2D animator might have tracked their arcs in a manner similar to the following image:

Another great example from Raf is this one from Tarzan. Notice how the whole body was used to define a motion arc, not just one single point. 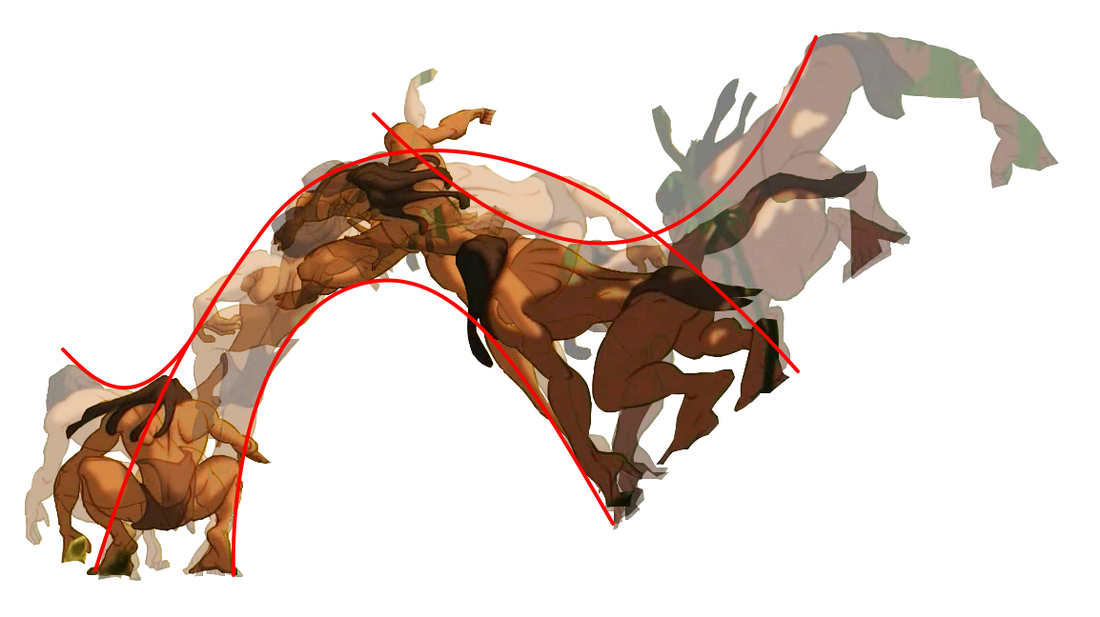 The tools to do quick and clear onion-skinning and flipping are not readily available to many CG animators. There are some tools on the market including the Onion Skinner from Anzovin Studios. But while these tools are helpful, and highly recommended, they still don’t allow the freedom that traditional 2D has offered for close to a century.

“Someday,” said Raf, when asked if there was hope for CG tools, “there will be new animation software and things will get better.”